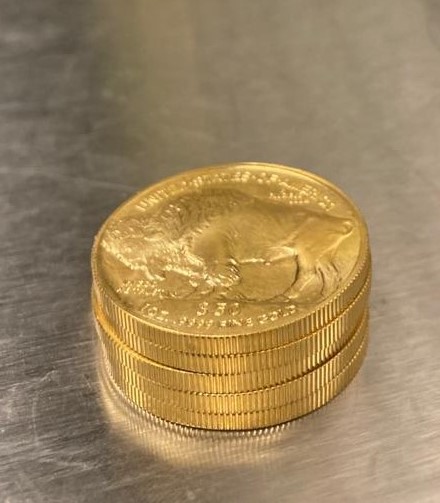 The American Buffalo was first introduced in 2006, and was the first 24 carat 1 ounce investment grade gold coin to be produced by the US Mint. The Buffalo was introduced to challenge the Canadian Maple Leaf for its position as the dominant 24 carat gold coin for investors in North America and further afield. The one ounce coin has a nominal value of $50 and is considered legal tender in the US.

The Presidential $1 Coin Act of 2005 was a major catalyst in the development of the US Buffalo along with a number of other commemorative coins in the US. The act was put in place in an attempt to modernize and increase the development of American made coins with a particular focus on the aesthetic appeal of the coins. Under Title II of the Act, the US Mint began manufacturing the one ounce gold Buffalos with a face value of $50 and a minting limit of 300,000 coins per annum. The uncirculated and proof versions of the coin were introduced in June and July 2006 respectively. The success of the one ounce coin in its first two years prompted the US Mint to begin minting the coin in denominations for 1/2, 1/4 and 1/10 oz with face values of $25, $10 and $5 in 2008. This decision proved to be extremely fruitful for the mint as investors flocked to gold as a safe haven asset during the sub-prime mortgage crisis of 2007 to 2010. Demand for the bullion coin was so high during this period that in September 2008, the US Mint had to stop selling the coin as they could not meet the huge demand.

The design on the American Buffalo coin we trade today was inspired by the American nickel that was minted from 1913 to 1938. This was originally designed by James Earle Fraser and was nominated to be the design of the new 24-carat coin. The obverse of the coin features a Native American that was originally constructed by Fraser to depict a combination of the features of three Native American tribe chiefs; Iron Tail, Big Tree and Two Moons. This side also features the word ‘LIBERTY’ and the year of minting.

The design on the opposite side is taken specifically from the type-1 design that featured on the nickel in early 1913. The coin gathers its name from the reverse of the coin as it portrays an image of a Buffalo standing prized on a mound pressing its head against the front edge of the coin. Fraser claimed the Buffalo was a Bison called ‘Black Diamond’ from the Bronx Zoo. Similarly, to the gold American Eagle this side also features the words “e pluribus unum” (Out of many, one) and “In God We Trust” it also shows the weight and nominal value.