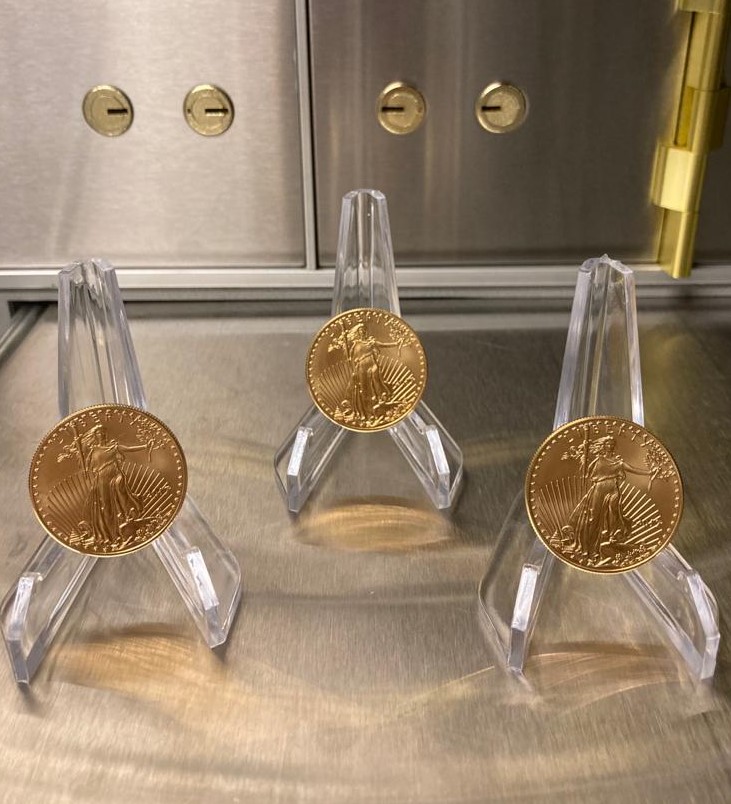 The American Eagle is a world-renowned gold bullion coin manufactured by the U.S. Mint in West Point, New York and Philadelphia. The Gold Bullion Act of 1985 enabled the U.S. mint to begin minting the American Eagle coin. The 1 ounce gold coin has a $50 face value, and is the most popular size, with smaller denominations also available. The coin was initially introduced as a 22-carat coin to challenge the huge market share held by the South African Krugerrand at the time. The Eagle quickly became popular among American investors, especially after economic sanctions against apartheid in South Africa (introduced in 1985) made the importation of Krugerrands illegal. The sanctions, combined with the economic recession of the 1980s created huge demand for the coin as an American safe haven asset.

The direct origins of the American Eagle coins we know today date as far back as 1972. The original coin was offered with a $10 value and was also minted as a quarter, half and double eagle coin with values of $2.50, $5 and $20. The coins became hugely popular during the 1930s as the U.S. suffered through the Great Depression and holding gold became popular as a safe haven asset. The Gold Bullion Act of 1985 introduced by Ronald Reagan, allowed for large scale minting and widespread distribution of the gold bullion coin from 1986 onwards. The 22-carat coin is now the most popularly sold bullion coin in the United States having sold 651,000 gold coins (and more than 27 million of the silver 1 ounce edition as of November 2020.

The design on the obverse of the coin depicts a depicts a striking image of Lady Liberty. This was first designed by the Irish born Augustus Saint-Gaudens on the $20 gold coin produced from 1907 to 1933. Augustus took inspiration from the Greek and Roman coins of old to show Lady Liberty striding gracefully with an olive branch in one hand and a lit torch in her other, as a symbol of hope for future U.S. generations. The Capitol building can be seen in the background. After Reagan’s Gold Bullion Act was passed, although Augustus was deceased, his design was adapted and now features on the modern coin.

The coin gathers its name from the design on the reverse which features a male eagle designed by sculptor Miley Busiek. This side of the coin portrays a bald eagle flying towards a nest where a female eagle and their hatchlings are waiting. It features the words “e pluribus unum” (Out of many, one) and “In God We Trust” it also shows the weight and nominal value. Luckily Miley lived long enough to be present at the inaugural minting of the coin in 1986.