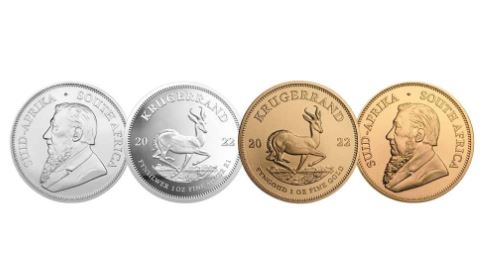 The South African Krugerrand has been one of the most popular gold bullion coins on the market in recent decades. Infact its allure has continued well into the twenty-first century. Therefore, let’s take a closer look at this remarkable bullion coin.

History of the South African Krugerrand

In the 1960’s, South African gold mines produced 70% of the gold distributed around the world. The South African Chamber of Mines had an inspired idea to help promote South African gold. It planned to issue a one ounce bullion coin, which became known as the Krugerrand or Kruger for short. Previous to this, gold coins had been struck primarily for the wealthy. However, the Krugerrand was designed as a coin for the hard-working wider population who wanted to preserve their savings. The Krugerrand enabled members of the general public to become private owners of gold bullion. Around this time the global gold standard was coming to an end and possessing gold for private ownership was regarded as a criminal offence. The South African government, seeking an opportunity to make the most of a new marketplace and make gold ownership legal, created the gold bullion Krugerrand coin.

Krugerrands were first minted and issued on the 3rd July 1967, and have been produced every year since. Originally only one size was minted, which contained one full troy ounce (31.1035 grams) of pure gold. During the early years of its inception, initial distribution numbers were relatively small. Following the final collapse of the gold standard in 1971, the promotion of gold was considered important. The chosen means to drive demand was the Krugerrand. During the 1970’s the Krugerrand was the predominant way for individuals in most parts of the world to purchase gold bullion. Krugerrands became particularly popular with U.S. gold investors. At that time, no U.S. bullion coins were being minted. The commodities markets enjoyed a major bull market during the 1970’s and the demand for the coin greatly increased. The price of gold soared to over $2,200 an ounce by the end of the decade. However, the demand level for Krugerrands varied widely over the years. It rose steadily throughout the 1970s and declined through the 1980s. During the late ’80s, South Africa faced a hurdle in trying to get the coin to the Western World. During this time economic sanctions were held against South Africa for its policy of apartheid. Buying Krugerrands during these times could be seen as approval of the practice, and so some Western countries such as Great Britain made the Krugerrand an illegal import during these times.

The sanctions ended with the end of apartheid. At its peak, the Krugerrand accounted for over 90% of the gold coin market globally. Due to its popularity three other sizes were introduced, namely a half, quarter, and tenth ounce size. Its dominance as the world’s main bullion coin did however decrease through the years as other nations introduced their own gold coins. After the unrivalled success of the Krugerrand, other countries followed suit. The first was Canada, who introduced their now world-famous Gold Maple Leaf coin in 1979. Entering the market when they did, the Canadian mint was in a strong position since Krugerrands remained illegal in North America at that time. The Chinese gold Panda coin came next in 1982. The United States minted the American Gold Eagles in 1986. Finally, the Britannia from the Royal Mint in the UK was released in 1987.

Since the end of apartheid in the 90’s, production levels of the Krugerrand have steadily increased. The Krugerrand is now seen as one of the most well-respected gold coins in existence today. As of today, over 50 million ounces of Krugerrand coins have been sold world wide.

Infact, the resurgent popularity of gold Krugerrands, coupled with rising gold and silver prices, led to the South African Mint manufacturing a silver version of the coin in 2018. The pure silver Krugerrand coin features the same design as the original gold Krugerrand.

The design of the Krugerrand has not been changed since their initial year of release in 1967. On the front is a portrait of Paul Kruger, the first President of South Africa who led the country from 1883 to 1900. Paul Kruger held office when one of the world’s most profitable mines, Durban Deep, was founded in 1896. He also presided during the Witwatersrand Gold Rush, which led to the founding of Johannesburg, one of South Africa’s largest cities.

Each one ounce denomination of the South African Krugerrand Gold coin weighs 33.930 grams. The coin contains 31.1035 grams of pure gold. Therefore, the coin consists of 91.67% pure gold and the remainder is made up of copper. The copper composition makes Krugerrands more resistant to scratches compared to other gold bullion coins that are pure gold. The copper component also gives Krugerrands a somewhat orange-hued tint compared to bullion coins that are pure gold. The coin’s diameter and thickness are 32.77 and 2.84 mm respectively making it compact and convenient to store.

The reputation of the Krugerrand is perhaps its most important asset. It is still the most extensively collected and traded bullion coin in the world. Thus making your purchase of a Krugerrand a highly liquid investment. This combined with its aesthetic appeal, history and design makes it difficult to find a better coin for investment purposes.

Krugerrands appeal to professional and private investors who wish to make a direct investment in gold bullion, as a hedge against the U.S. dollar, or further diversify their portfolio. Investors continue to buy gold because of the proven longevity of its value. Many gold investors consider this precious metal a safe investment that will retain its value even during an economic downturn. Owning a tangible asset appeals to some investors, who may put greater trust in physical coins or bars compared to other forms of investments that exist merely on paper. However, investing in Krugerrands isn’t limited to the savvy and experienced investor, some choose to purchase a Krugerand as a gift or with the intention of passing it on to future generations.

No matter what your reason, if you are looking to invest in a South African Krugerrand or any other bullion coin of your choice contact Merrion Gold for a competitive quotation on (01) 254 7901 or email info@merriongold.ie